Building a House Is Stressful, Even if You’re Sanjay Gupta

The overwrought and the over-scheduled may be cheered to learn that Sanjay Gupta speaks quite highly of stress.

“Often, the aspiration is to reduce it. But what we’ve found is that reducing or eliminating stress is not necessarily the best goal when it comes to brain health,” said Dr. Gupta, 53, a neurosurgeon, Emmy Award-winning chief medical correspondent for CNN, and an author whose books include the recently published “12 Weeks to a Sharper You: A Guided Program.”

“We sometimes even need high periods of stress,” he continued. “But you’ve got to have the means in between to decompress. Your environment and how you live, where you live — it all makes a big difference. I come home to find those periods of downtime, which is critically important to energy and brain health.”

Dr. Gupta’s recharging station is a slate-shingled, beige-stucco house in Atlanta that calls to mind a grand French Renaissance chateau and, thanks to the Italian windows and small balconies, a cozy Tuscan villa. Curiously, and maybe fittingly, this is a place born of stress. Which is another way of saying that Dr. Gupta and his wife, Rebecca Gupta, had it built.

The couple’s previous house — the first they ever owned — was a three-bedroom in Atlanta’s Virginia-Highland district, a highly walkable neighborhood full of children and dogs, close to a hospital and to the highway for speedy trips to the airport. “But by the time we had our third child, we began to realize we were going to need more space,” Dr. Gupta said. “We looked into adding another level or something, because we really loved the house, but it just wasn’t possible.”

No place like home: “We have three teenage kids, and we wanted to create a place that their friends would want to come to rather than going elsewhere.”

Initially, the idea of building a house wasn’t on the table. But then they found the ideal lot: large (almost three and a half acres), flat where it needed to be flat, and full of old-growth trees arrayed so they wouldn’t have to be sacrificed to accommodate an 8,000-square-foot house.

Somewhat unnervingly, Ms. Gupta, a lawyer-turned-venture-capitalist, once mentioned to her husband that 80 percent of couples who build a house together end up getting divorced. (A quick Google search turned up slightly rosier statistics.) So perhaps it was fortunate that Dr. Gupta was frequently out of the country on assignment for CNN while construction was at full throttle.

“It was really a situation where Rebecca did what she thought was best,” he said. “But the process was hard on her.”

Determined not to make it harder, Dr. Gupta tried to limit the “helpful” suggestions and the second-guessing. “I think it’s how you ask that’s important,” he said. “‘I’m sure there’s a really good reason, but why is that wall there?’ rather than ‘Why in God’s name did you….’”

It’s hard to assess the effect on Dr. Gupta’s mental health, but “the few times I was asked for my opinion, basically, the opposite thing was done,” he said.

Never mind. He is very happy with the results: the many archways that make it easier for his elderly parents and in-laws to move among rooms when they come visit; the sunroom that seems to bring the outside in; and, most especially, his two-story oval study at one end of the house.

A photograph of an old Cuban theater, a gift from Ms. Gupta, hangs over the working fireplace on the upper level. (“I’ve always been fascinated by Cuba,” said Dr. Gupta.) The figure of a medicine man stands sentry just outside the surround. On the shelves: models of a cervical spine, a lumbar spine, thoracic spine, a model of a skull and lots of neurosurgery texts. A hidden staircase presents a challenge for those who aren’t conversant with the phrase “do not disturb.”

Dr. Gupta also derives pleasure from what the house is missing — specifically, a dining room. “That was a conscious decision,” he said. “Rebecca and I didn’t grow up in a super formal way. Things were more casual and family-oriented. That’s a metaphor for the house overall.”

Three interior designers have passed through since the house was completed 13 years ago. When the family first moved in, the palette was earth tones. These were replaced by neutral tones and soft colors like pale lavender. (Dr. Gupta has a pronounced weakness for purple.) The most recent designer lobbied for white walls and bold pops of color. Castoff saris belonging to Dr. Gupta’s Pakistani-born mother were cut up and made into throw pillows to add a personal touch. 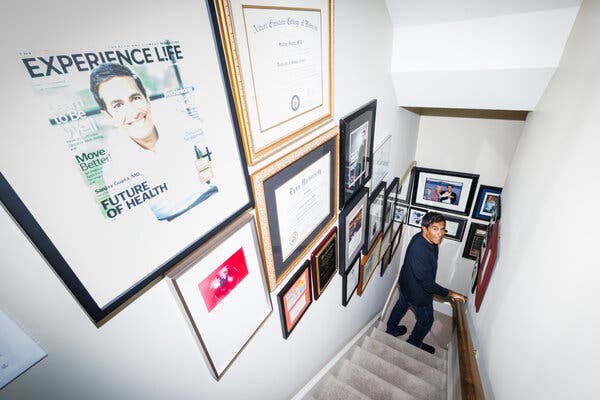 The grounds have had their own makeover, with the addition of a fountain, a pool, a hot tub and a vegetable garden. On a trip to Xi’an, China, the Guptas became so enamored of the Terracotta Army, a group of terra-cotta soldiers depicting the military force of the first emperor of China, that they had five clay figures made to serve as garden ornaments, each representing a member of the family.

Two of the sculptures have since shattered. So be it. Dr. Gupta isn’t especially sentimental.

“I knew this would be a good house for raising kids, and that has been true. But whenever I think about the house itself, I don’t have a grand affinity,” he said. “We’ll sell it someday. We don’t need a place this big.”

It’s the memories of his three teenage daughters growing up in the house that will have the greatest resonance, he said: “And those memories will exist no matter what, whether we’re here or not.”