Australia’s 30th Prime Minister, Scott Morrison is the true definition of a leader with a 360º worldview. During his tenure, Morrison was tasked with several difficulties that required unique and innovative solutions. From managing the public safety of Australians during the pandemic to mitigating an economic crisis, controlling natural disasters, and leading the country while others were at war—Prime Minister Morrison led Australia with his particular brand of calm decisiveness and rationale. A globalization mastermind, Morrison lends his boundless influence and experience to audiences around the world.

Budget 2021: Securing Our Recovery from COVID-19

Prime Minister Morrison is extremely adept at understanding the future of globalism, including threats to the rules-based international order, the role of UN and other multilateral institutions, the arc of autocracy versus liberal democracy, the security of supply chains, the digital economy, resources and commodities, global trade, and digital trade.

In this presentation, former Prime Minister Scott Morrison describes Australia’s successful COVID response and results, and the leadership lessons gained from such an experience. Morrison can also expertly discuss the implications for the world economy, globalization, and regional security issues caused by COVID.

In this discussion, topic areas include: economic and strategic implications of great power competition, national responses, and cooperation by allies and like-mindeds, the AUKUS agreement and the QUAD, defence and cyber security, standing up to China, working with India and Japan, and dealing with South East Asia.

The primary areas of discussion for this speech topic are technology pathways and public policy (including the role of government), climate resilience and mitigation, Australia’s hydrogen and clean energy production, the future of targets and trading schemes, developing economies, energy transition, and taming developing country emissions.

In this important discussion, Prime Minister Morrison addresses the rise of secularism in western democracies, the impacts of social media and new technologies, the future of community, marginalisation of faith and Christianity, perils of identity politics, freedom of speech and the right to be offended.

As Prime Minister of Australia from 2018 to 2022, Scott Morrison successfully led his nation through the most difficult and significant challenges Australia had faced since the Great Depression and the Second World War.

Under Mr Morrison’s national leadership Australia had the third lowest COVID fatality rate in the OECD, one of the highest vaccination rates in the world and an economic response that enabled Australia to outperform all G7 and most OECD nations in both employment and economic growth.

On the international stage, Mr Morrison was known for his leadership role to counter an increasingly assertive China in the Indo-Pacific region. Mr Morrison pursued this by:
• his founding membership of the Quad leaders dialogue with India, Prime Japan, and the United States,
• as architect of the landmark AUKUS trilateral defence agreement between Australia, the United States and the United Kingdom, and
• restoring Australian defence spending to more than 2% of GDP.

Domestically Mr Morrison continued to steward the Australian economy to its lowest unemployment rate in almost 50 years, while being one of only nine countries in the world to maintain a AAA credit rating from all major international credit rating agencies.

Prior to becoming PM Mr Morrison served as Federal Treasurer for three years where he designed and implemented major income tax, banking, housing, consumer data right and financial technology reforms and restored the federal budget to balance prior to the 2020 pandemic. Mr Morrison also served as Minister for Social Services and Minister for Immigration and Border Protection from 2013 to 2015. He was first elected to Parliament in 2007.

Prior to entering parliament Mr Morrison served in a series of senior executive roles in the private and Government sector in tourism, events and commercial real estate, both in Australia and New Zealand, including as Managing Director of Tourism Australia.

Mr Morrison holds a Bachelor of Applied Science with Honours in Economic Geography from the University of New South Wales, where he graduated in 1990. 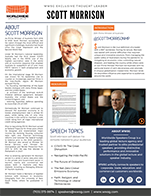