In March 2022, Pence’s policy organization Advancing American Freedom announced its Freedom Agenda, a vision for restoring freedom and a framework of ideas and solutions for how to achieve that vision. The Freedom Agenda provides a clear set of ideas that conservative leaders can use to advance a positive vision for the future and addresses the top priorities of the American people: economic opportunity, American strength and leadership on the world stage, and American culture.

His autobiography, So Help Me God, published in November 2022.

Pence is widely respected for his courage, resolve, and faithfulness to his country.

In his remarks, The Honorable Michael R. Pence draws upon his experiences on Capitol Hill, as the governor of Indiana, and in the White House to provide audiences with thoughtful conversation and practical takeaways. The former Vice President’s speech topics include but are not limited to:

– Policymaking: In this address, Pence cites his experiences as a congressman for the United States House of Representatives, Governor of the State of Indiana, and Vice President of the United States, focusing on his successful advancement of principled agendas.

–  Leadership: In this powerful presentation, Pence provides insight about high-level achievement obtained through servant leadership, calling upon his ascent from broadcasting to the White House.

-Faith, Values, and Service: In this anecdotal presentation, Pence references witnessing the American Dream from a young age and embracing his Christian faith, sharing perspective on the role faith and values have played in both family and public settings throughout his life.

Michael R. Pence, 48th Vice President of the United States, was born in Columbus, Indiana on June 7, 1959 as one of six children born to Edward and Nancy Pence. He earned his bachelor’s degree in history from Hanover College in 1981. While there, he embraced his Christian faith which remains the driving force in his life. He later attended Indiana University School of Law and met the love of his life, Karen.

Growing up in Indiana, surrounded by good, hardworking Hoosiers, Pence always knew that he needed to give back to the state and the country that had given him so much. In 2000, he launched a successful bid for his local congressional seat, entering the United States House of Representatives at the age of 40. He was re-elected six times to represent Indiana in Congress. On Capitol Hill, he established himself as a champion of limited government, fiscal responsibility, economic development, and educational opportunity. His colleagues quickly recognized his leadership ability and unanimously elected him to serve as Chairman of the House Republican Study Committee and House Republican Conference Chairman.

In 2013, Pence left the nation’s capital when Hoosiers elected him the 50th Governor of Indiana. He brought the same limited government and low-tax philosophy to the Indiana Statehouse. Due to his relentless focus on jobs, the state’s unemployment rate fell by half during his four years in office, and at the end of his term, more Hoosiers were working than at any point in the state’s 200-year history. Working as Governor of Indiana, Pence also increased school funding, expanded school choice, and created the first state-funded Pre-K plan in Indiana history. Under his leadership, Indiana invested more than $800 million in new money for roads and bridges across the state. Despite the record tax cuts and new investments in roads and schools, the state remained fiscally responsible, as Pence worked with members of the Indiana General Assembly to pass two honestly balanced budgets that left the state with strong reserves and AAA credit ratings that were the envy of the nation.

Pence played a very active role in the Vice Presidency under President Donald Trump, achieving a broad array of legislative accomplishments. He also excelled at articulating the administration’s agenda locally as he traveled the nation as well as internationally, representing The United States of America at multiple conferences held in Asia, the Indo-Pacific, the Middle East, and South America. While Pence was in office, America renewed its commitment to space exploration, reviving the National Space Council of which Pence acted as Chairman. Under Vice President Pence’s leadership, the National Space Council enacted a new National Space Policy and named 18 NASA astronauts to the Artemis Team. Vice President Pence also led the White House Coronavirus Task Force, combatting the worldwide COVID-19 pandemic by driving American innovation in testing, medical supplies, therapeutics, and the development of safe vaccines, which was accomplished in groundbreaking time through Operation Warp Speed.

In March 2022, Pence’s policy organization Advancing American Freedom announced its Freedom Agenda, a vision for restoring freedom and a framework of ideas and solutions for how to achieve that vision. The Freedom Agenda provides a clear set of ideas that conservative leaders can use to advance a positive vision for the future and addresses the top priorities of the American people: economic opportunity, American strength and leadership on the world stage, and American culture.

His autobiography, So Help Me God, published in November 2022.

Former Vice President Pence remains grateful for the grace of God, the love and support of his family, and the blessings of liberty that are every American’s birthright.

"Speaking first-hand from his highly unique view as the Vice President gave the audience a profoundly unique, unforgettable experience. His deep understanding and practice of faith-based principles that are the underpinnings of America leave the audience with hope for the future." –President, UPF International 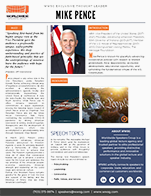 After serving as vice president of the United States, Mike Pence created a new organization dedicated to promoting and defending the policies he championed during…

Mike Pence: ‘My faith informed me and sustained me’ January 6, 2021

Former Vice President Mike Pence spoke at a church in Dallas Sunday to promote his autobiography. He spoke during a service with Robert Jeffress, senior…

Pence urges Republicans to back McCarthy for Speaker

Former Vice President Mike Pence is offering his support for Rep. Kevin McCarthy (R-Calif.) in his bid for Speaker, urging Republicans to rally around the former minority leader after…

The oath of office

The original oath for members of Congress included these words: “I do solemnly swear (or affirm) that I will support the Constitution of the United…

CHARLOTTE, N.C. — Former Vice President Mike Pence will be in the Queen City Tuesday. Pence is planning to visit the Billy Graham Library to sign copies of…

Mike Pence staffs up with an eye on 2024

The former VP is bringing on Ben Sasse’s spokesperson. More hirings are likely to come. Former Vice President Mike Pence is building out his political…

In a wide-ranging interview with Meet the Press, former Vice President Mike Pence addresses his break away from former President Donald Trump after the January…

Former Vice President Mike Pence reacts to video of January 6 rioters calling for him to be hanged and discusses his conduct during the insurrection.

Pence on Jan. 6 threats from Trump: ‘Forgiveness is not optional’

Pence explains why he and Trump have ‘gone separate ways’

Now Available: So Help Me God By Mike Pence

The autobiography of former Vice President Mike Pence. Loyalty is a Vice President’s first duty; but there is a greater one—to God and the Constitution.…

Loyal to God and Trump, Mike Pence Defends His Record

In “So Help Me God,” the former vice president looks back on his career with one eye on where it might be headed. As much…

My Last Days With Donald Trump

Thirteen days after the 2020 election, I had lunch with President Trump. I told him that if his legal challenges came up short, he could…

Some stories are told best in black and white, like the brilliant 1944 film Gaslight starring Ingrid Bergman, whose husband tries to convince her that she…

Pence rallies alongside Kemp on eve of Georgia’s G.O.P. primary for governor.

(NY Times) - Both Republicans peppered their speeches with repeated jabs at Stacey Abrams, the likely Democratic nominee for governor.

Why former VP Mike Pence is returning to Michigan on Tuesday

(Local 10) - Former Vice President Mike Pence applauded the essence of a leaked draft opinion suggesting that the U.S. Supreme Court could be poised…

Pence heading back to New Hampshire in May

Rep. Jamie Raskin says it was ‘chilling’ to hear that Pence refused to be whisked away from the Capitol during the riot

In trying to help Republicans win back a congressional majority in the fall, Pence may be helping himself for a White House run in 2024.

(Fox) – Pence will visit the state’s capital city to speak during the April 30 commencement at Columbia International University.

Pence distances himself from Trump as he eyes 2024 campaign

(Washington Post) – Pence is beginning to distance himself from Trump as he takes increasingly overt steps toward a White House bid of his own.

(NBC) – Former Vice President Mike Pence will be speaking at the University of Virginia next month.

(FOX) – Former vice president reacts to the latest developments on the Russia-Ukraine crisis on 'Hannity.'

Opinion: Jan. 6 was a tragedy. Busting the filibuster would be, too.

(Washington Post) – In the year since that fateful day, states across the country have enacted measures to try to restore confidence in the integrity of…

“He’s the Shadow Front-Runner”: In 2024, Mike Pence is Gearing Up to Go Rogue

(Vanity Fair) – The former veep is loosening up in public appearances and earning brownie points with donors. Allies see a man who’s ready to…

LAS VEGAS – Former Vice President Mike Pence this weekend vowed that “we’re going to win back this country in 2024.” But that’s the only hint Pence…

(AL Reporter) – All proceeds from the dinner event will go to support the university, primarily scholarships.

Pence returns to the arena — as a podcaster

Mike Pence: Biden Broke Our Deal With the Taliban

(WSJ) – It’s a foreign-policy humiliation unlike anything our country has endured since the Iran hostage crisis.

(Politico) – It's the first such event the former vice president has held since leaving office in January.

Mike Pence: If You’re Eligible to Get a Coronavirus Vaccine, Get One

(National) – Former Vice President Mike Pence is urging everyone to get vaccinated against the coronavirus, if you haven’t already.

Pence Calls on Biden to Get Tougher on China, Virus Origins

Mike Pence to give a speech on U.S.-China relations

Why Mike Pence’s speech was really important, and what it says about 2024

(FOX) – Latest developments, buzz, and speculation in the next race for the White House.

(Westport News) – “We have the winning agenda,” Pence said. “And now it's incumbent upon us to take that winning agenda to the American people.”

(The Hill) – Former Vice President Pence on Thursday made his return to the public eye.

(WLFITV) – Readers could soon add a few more books to their collection.

Building on the Trump administration’s victories to advance American freedom

(Washington Times) – Advancing American Freedom will help ensure that we continue to boldly forge a future of freedom for all the American people.

Pence will make his first speech since leaving office.

Election Integrity Is a National Imperative

(The Daily Signal) – Every citizen deserves the freedom to support, oppose, criticize, or promote the candidates and causes they believe in.

(Indianapolis Star) – “While we don't know what the future holds," Pence said, "we know who holds the future."