Guest Post by Paul Nicklen | Unicorns of the Sea

This is a guest post by WWSG exclusive speaker, Paul Nicklen.

“There is, one knows not, what sweet mystery about this sea whose gently awful stirrings seem to speak of some hidden soul beneath.”  – Herman Melville

Unicorns really do exist. In my years as an assignment photographer for National Geographic, I had assignments that were hard to do, assignments that were beautiful to realize, and assignments that defied all odds of success. One assignment, though, 15 years ago, almost to the day, managed to encompass all three. It is an assignment that has stayed with me to this day, one of those life experiences that both shape the person you will become and is impossible to forget.
The assignment was to photograph narwhals, the mysterious tusked whales of the Arctic, “The unicorns of the sea,” which the Inuit describe in Inuktitut, their native language, as qilalugaq qernertaq, “the one that is good at curving itself toward the sky.” 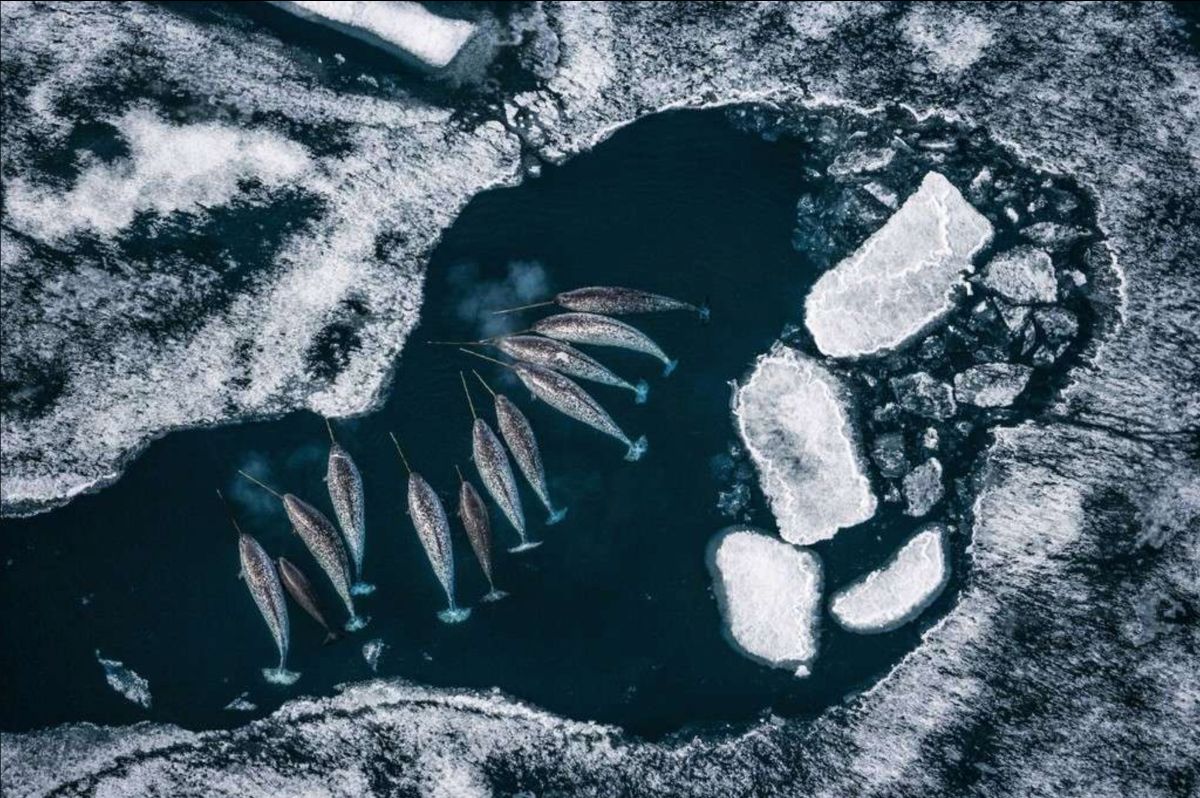 A group of narwhals is called a blessing. Creating this image was one of the most challenging, and rarest experiences of my career.

I learned from a young age that the chances of seeing narwhals — a mysterious creature that even today many people don’t realize exists — out in the broken sea ice are next to impossible. Early in my career as a wildlife photographer, I would go to Baffin Island year after year, and I would ask the hunters where I could find “the whales with tusks,” so I could photograph them in their natural state.
They’re out in the broken sea ice, they would tell me, where they are elusive and hard to see, let alone photograph.
When people tell me something is next to impossible, my heart always skips a beat because I know then that there’s a chance to photograph something unique.
Knowing the narwhals were all the way out in drifting pack ice, I decided to buy a small ultralight plane held together with bubblegum and duct tape, and attach amphibious floats. It took many seasons working with local Inuit guides, scouring the frozen coastline, and flying my ultralight plane doors off over the drifting pack ice of Lancaster Sound with my friend and fellow pilot Brian Knutsen, but one day it all came together. On a hot summer night in July, it suddenly appeared, slowly at first, just a few narwhals, then dozens, then hundreds — a sight for the ages, stretching as far as the eye could see, incredible views of these mystical, magnificent creatures. 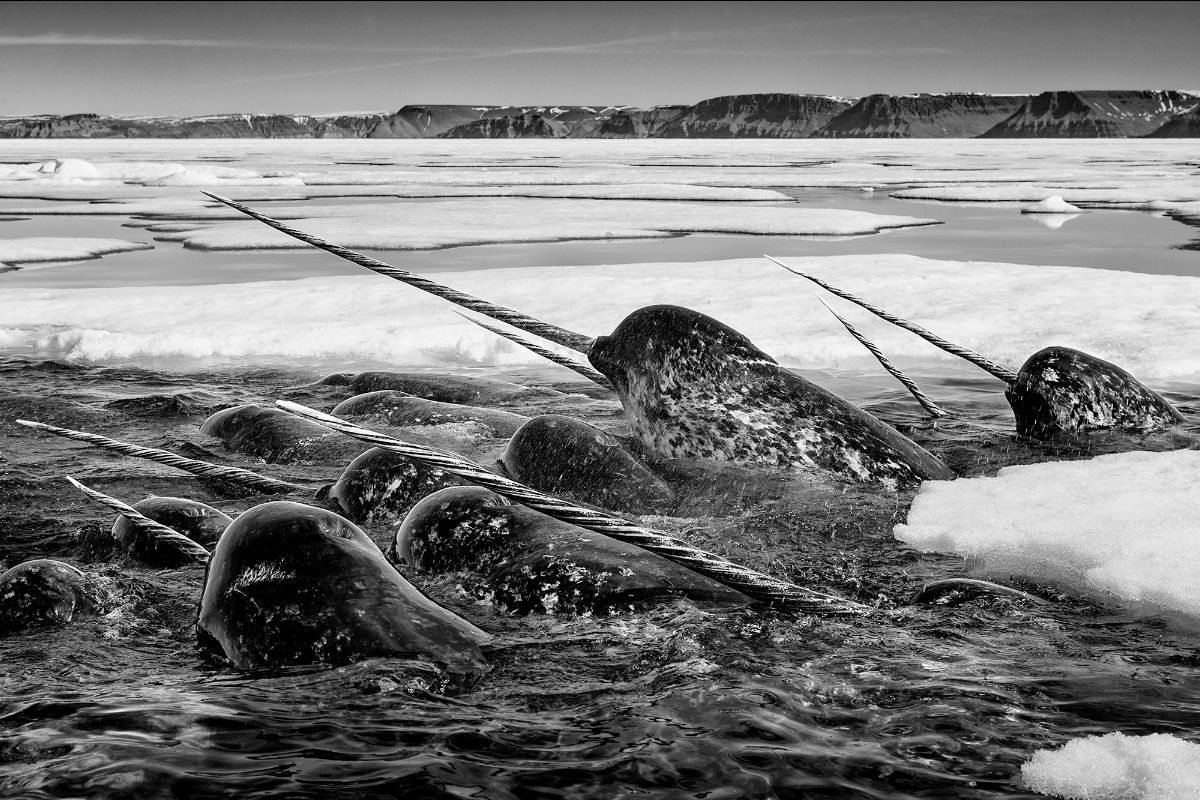 A narwhal’s tusk is actually a tooth that can grow up to ten feet long and has as many as 10 million nerve endings.

Narwhals can grow to be 18 feet long and weigh as much as 4,200 pounds. They favor cold Arctic waters and live year-round in the sea ice off Greenland, Canada, Norway, Russia, and Alaska. Once a year, at the height of the Northern summer, they gather around Canada’s Lancaster Sound to feed on Arctic cod, an estimated 70,000 of them, three-quarters of the world population.
I started to see shapes and patterns, and that’s where your artistic right brain kicks in. We carried out to sea and started to photograph other large groups of narwhals. We saw an opportunity to land the ultralight on the sea ice, and we took it — I knew we would get out there possibly once in my life. The dream I’ve nurtured since I was young was to see narwhal tusks absolutely everywhere. I could physically reach out and actually grab a tusk if I wanted. I sat there on the ice and composed images of narwals that were blissfully relaxed, living out their lives on the surface before diving back under the ice to feed on polar cod.
Eventually, after a period of time that seemed timeless, we got the ultralight back into the air and flew back to camp, where I immersed myself in contemplation of what I had just seen, and experienced in person. 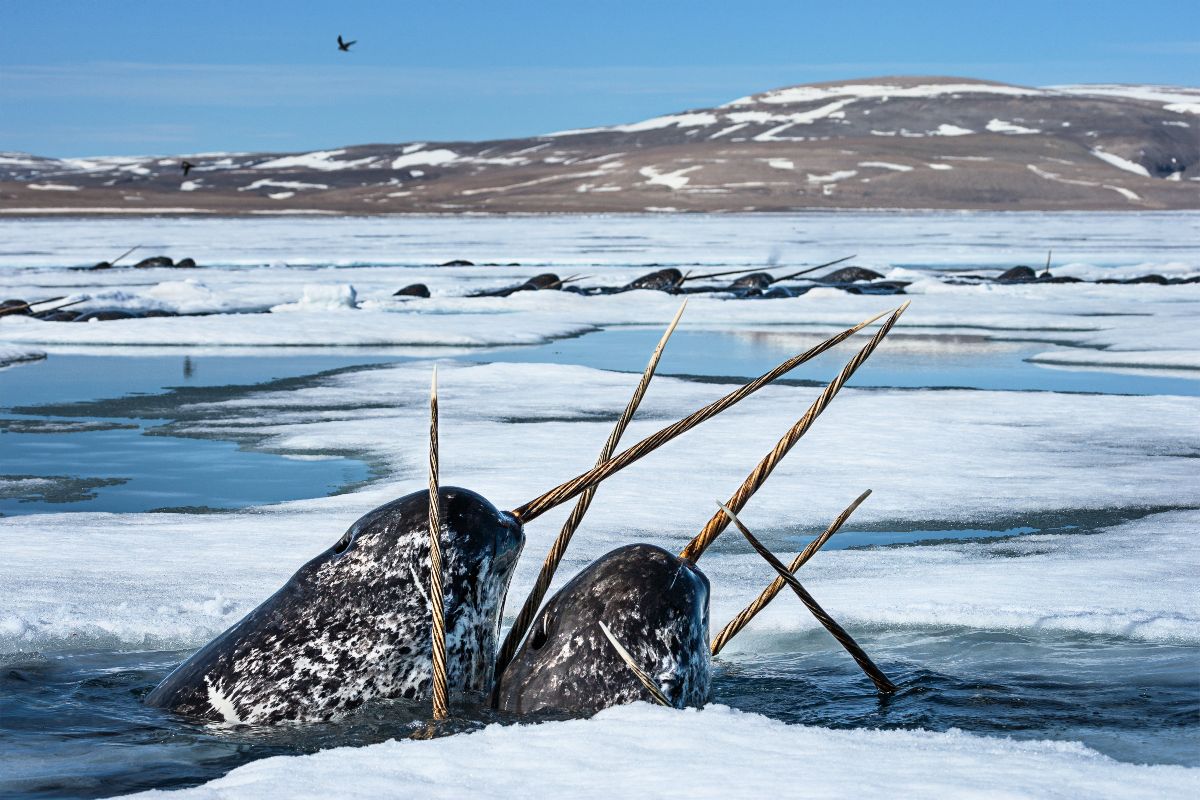 Narwhals appear to reach toward the sky with their ivory tusks when they surface to grab a breath of much-needed air between dives to feed on Arctic cod. Narwhals can dive more than a mile deep and hold their breath for more than an hour.

After five years of trying, in just one day of good shooting, we were able to photograph an entire feature story for National Geographic on one of the most elusive wild creatures on the entire planet. These images of a gathering of unicorns with their ivory tusks represent, for me, an assignment that had it all. It had challenges. It had fear. It had the fear of failure and memories of a failure beyond any failure I’ve ever experienced, before or since. I had failed every day for five years to come back with some semblance of what it was I wanted to photograph that day, that I had dreamed about since I was very young, and it meant the world to me to finally succeed.
Having lived most of my life in Canada’s North, I feel nostalgic every June and July when I am away from the ice edge of Lancaster Sound and am not there to see the gathering in person. Today, at 18,500 square miles (48,000² km), Lancaster Sound — Tallurutiup Imanga to the Inuit — is Canada’s largest marine protected area.
That fills me with a quiet joy in these troubled times. Rising sea temperatures and human behavior continue to pose a threat to narwhals’ very existence. If we are to have any chance in the campaign to save the planet, it will be in small steps like these.