In addition to being a New York Times Bestseller, Miller’s latest book, Chip War: The Fight for the World’s Most Critical Technology won Financial Times’ Business Book of the Year for 2022!

Learn More About the Book 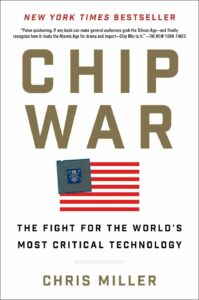 Chip War explains how computer chips have made the modern world—and how the U.S. and China are struggling for control over this fundamental technology. A handful of companies control the manufacturing of all the world’s semiconductors, giving them a chokehold over the computing power on which everything from the biggest data centers to the tiniest Internet-of-Things devices depend. The future of computing, the book argues, will be determined by who controls the ability to produce the world’s most advanced chips. Chip War was described by The New York Times as a “a nonfiction thriller” and was awarded Financial Times Business Book of the Year.

Professor Chris Miller’s expertise on international politics, economics, and technology inform his engaging speeches. Breaking down the motives behind international politics and economics in a thoughtful and concise manner, Miller provides audiences with fresh, alternative perspectives and leaves them wanting to know more. For his speaking availability, contact Worldwide Speakers Group.